Summerpole 2019 was the year disaster so nearly struck.  With just days to go we discovered that our Summerpole – centrepiece of the day’s festivities – was no longer in its storage location.  After searching and further enquiries sadly it appeared that the Summerpole had been stolen.

A flurry of frantic emails followed. What were we to do? What kind of person would want to take our beloved Summerpole – and just how did they move it undetected?  With the festivities looming Pilgrims were not a happy bunch.

Fortunately,  thanks to the hard work and resourcefulness of Summerpole stalwarts Phil and Sally Gorton a new pole was ordered,  adjusted, decorated and ready to fly over Castle Green once more – Huzzah!

We’re not entirely sure but we *think* this is Summerpole number 5 – there was the original wooden one that rotted, an oversized one that had to be hastily trimmed down to fit,  a travelling Summerpole made to be taken to Sidmouth back in the ’90s,  the stolen Summerpole – the longest serving to date –   and now our new Summerpole, resplendent in the photo gallery below.

Thanks to all who worked so hard to make the event a success and especially to our Summer Court and guest morris sides  – without you Summerpole just wouldn’t be so much fun. 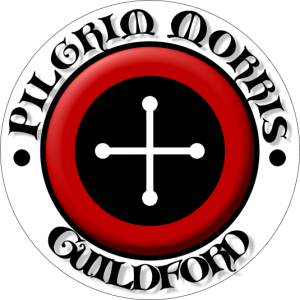